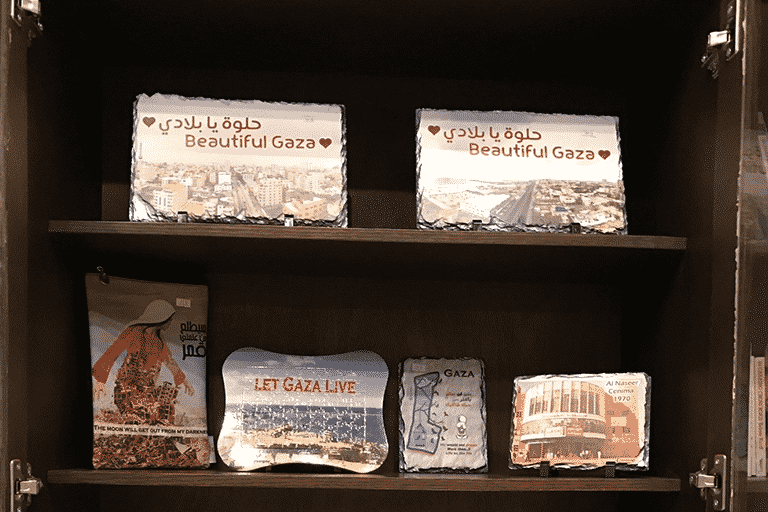 Her passion for life and love for design made her a self-fulfilling entrepreneur, Palestinian Rozan Al Khazendar, the owner of “Rozza Designs”, the first online gift shop in the Gaza Strip.
“My story began when I decided to return to the Gaza Strip after I finished studying computer programming in Egypt, and then I was able to get a job opportunity with UNRWA and private companies, but I always felt bored, and that this work is routine, and that I have to do it,” Al Khazendar tells. I am looking for something creative and innovative. ”

And she continues, “My search for everything new, my passion for life, and my unwillingness to find the jobs that I got, pushed me to stop working, looking to do something of my own that would make me happy and those around me.”

Project Idea
The idea of her project began with making handicrafts for her family and friends, but her study of the computer world led her to think of tweeting outside the flock, so she began to combine her skill with what she learned in the computer world until she was able to come up with her project, which is “Rozza Designs.”

During her interview with “Palestine” newspaper, she says: “My project’s idea is based on designing the ideas that customers request by sending them those requests via the Internet, and then printing them on many shapes such as cups, clothes, and pillows, or panels attached to the walls, and mobile phone covers. , School bags, and various forms of accessories. ”

“I have two production lines,” Al Khazendar adds. “The first person can choose a specific design, and then I felt that there was no profit without value for the work.”

It was revealed that the second line of work allocated part of its profits to embrace women and youth who have ideas and experiences, and specialization in making special products in which the bright side of the Gaza Strip is displayed, and designs that show the beauty, nature, monuments, and the creative personalities in Gaza.

It indicates that it is working on the production of heritage products such as olive wood, which is represented in printing the shape of Gaza on olive trees, and more advanced work; In order for foreigners to acquire them when they visit the Gaza Strip and buy such products.

Achievements and challenges
“Every stage of my life was like an achievement for me”, with these words Razan expresses her success and indicates that the two biggest achievements they achieved in 2017 were the first; She was named an Entrepreneur and was chosen to travel to America to participate in the “women entrepreneurial” program.

As for her second achievement, which she considers more than achievement and pride for her and the people of Gaza; It is that her success story as a Palestinian woman from Gaza is taught in private universities and Jordanian public schools in Amman, through the book “Establishing Companies”, supported by Queen Rania and King Abdullah, which embraces all the big startups and how she can become an entrepreneur, so it was one of the first success stories Mentioned in the book, my success story “Rozan Al Khazendar from Gaza”.

She points out that the biggest difficulties that she faced during her project were being a girl, how she worked in the field of printing, and the criticisms that she heard from time to time, in addition to the scarcity of raw materials and their lack of availability in the Gaza Strip, which causes poor liquidity.

Al-Khazendar aspires to expand its field of work, and for the “Rozza” Designs project to be a global brand. She says: “What prevents the presence of a product of our products in foreign countries, why is it not made in Palestine, in Gaza specifically.”

It seeks to have points of sale in the world, and is currently working on connecting networks so that its valuable products can reach abroad, namely “ready-made dresses from Gaza”; For the world to see the designs that come out of the people of Gaza who have ideas and creativity.

"A WORLD FULL OF CREATIVITY WITH A NEW DESIGN PERSPECTIVE"

Subscribe to get the latest articles and offers. We will not send you unwanted messages mail messages.
Copyright © 2022 Rozza Designs. All rights reserved